Editor Will Default to Fullscreen Mode in WordPress 5.4 – WordPress Tavern

Home/News/Editor Will Default to Fullscreen Mode in WordPress 5.4 – WordPress Tavern
Previous Next

Editor Will Default to Fullscreen Mode in WordPress 5.4 – WordPress Tavern

Riad Benguella announced on the core development blog last week the editor in WordPress 5.4 will ship in fullscreen mode by default. While some form of fullscreen or distraction-free writing has existed for years in the core platform, this marks the first time WordPress will make it the default experience.

Not all installations will see the fullscreen editor upon upgrading. The editor will be in fullscreen mode the first time a user opens the editor in a new installation, on a new device, or whenever WordPress resets a user’s preferences.

Some people were not happy with the timing of the code change, regardless of their feelings about whether it was a good decision to switch to a fullscreen experience by default. The change was slipped in three weeks after a feature and enhancements freeze for the WordPress 5.4 development cycle. This was also the same day that the first WordPress 5.4 release candidate was released. Some argued that the development cycle should remain sacred, that last-minute changes should be punted to the next cycle. Doing so would provide an appropriate level of testing and preparation. The shock-factor would also be lessened when more people are aware that a change is coming.

“I would have expected this to sit in the plugin for a cycle or two, and dropping an alteration to the editor’s behavior this major into core several hours before 5.4 was promoted to Release Candidate is very confusing to me,” said software engineer K. Adam White. “What about this change made it have to happen today, rather than following our release process and bundling this enhancement with 5.5?”

Matt Mullenweg, WordPress co-founder and 5.4 release lead, chimed in and accepted responsibility. “This is on me as release lead — I’ve been meaning to receive this in for a while but it got lost in the shuffle,” he said. “I’m very comfortable with the decision to have fullscreen by default given the user testing we’ve seen and other qualitative feedback, which I’ve also heard is similar to what folks like GoDaddy have found in their testing. The code change is minimal so if during the month of March we need to revert it, shouldn’t be a problem.”

Late changes can catch people who provide support or manage client websites off guard. Joost de Valk, founder and CPO of Yoast, noted that such changes also force extra work on people who maintain courses and other materials around the editor.

Admittedly, I have never used fullscreen mode since the block editor landed. I tested the earlier iteration when the classic editor was still the norm. I did not care for it then, but I also did not care for the classic editor. Instead, I always wrote in an offline editor. I was not the ideal test candidate for the feature. Since then, I have not given it much thought.

When testing the fullscreen mode in WordPress 5.4, I was a little shocked by the change. It felt like I stepped outside of my WordPress admin panel. However, that shock quickly wore off. The experience was not much different from working within the normal editor.

The only thing that was a poor user experience for me was clicking the arrow button at the top left of the editor. I had wrongly assumed the button would open the WordPress admin menu. Instead, it took me back to the posts management screen. The button does have a “View Posts” tooltip that appears when you hover it, but I tend to move fast and clicked it before I understood its purpose. 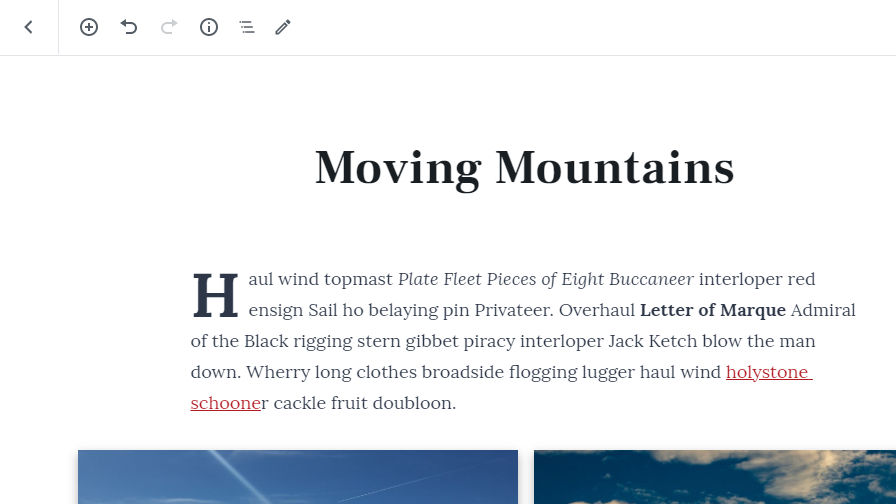 I was prepared to open a ticket to address this problem. However, the Gutenberg team was already on top of the issue and have merged a fix within the plugin that uses the WordPress “W” icon. It is unclear if this change will make it into WordPress 5.4. It would be ideal to avoid the same issue I ran into.

Finding these types of problems and addressing them is one of the primary reasons that we should avoid major changes to user interfaces late in the development cycle. If we are lucky, this is the worst problem that arises this time around.

The fullscreen experience would also be nicer if there was a button or keyboard shortcut to quickly switch modes. Currently, users must click the “⋮” button for tools and options. Then, select the editing mode.