Brian Gardner announced today that WP Engine has acquired his latest project, Frost. In an email sent out to all customers, Gardner said his team had issued refunds to all current customers. The business model is changing, and Frost will be a freely-available project going forward and focus on full site editing.

Frost is a WordPress theme that Gardner released earlier this year as the main product of a new startup business. The original version was shipped as a child theme of Genesis, the StudioPress theme framework he had spent much of his WordPress career working on. WP Engine acquired StudioPress in 2018, and Gardner stepped down from his role in October 2019. It did not take him long to find his way back into the WordPress theme development game, bringing his personal style back to the theming world with Frost. Then, he landed a new job within WP Engine’s ranks in September.

“I am leading the WordPress Developer Relations team at WP Engine,” he said. “We have a simple mission: Accelerate innovation in WordPress and help the community transition to the block editor and Full Site Editing (né Gutenberg). In addition, we want to cultivate an interactive and immersive community resource that serves as a treasure chest of knowledge and operates as a conduit between the WordPress project and its users.”

I asked if there was something concrete he could share, maybe what form that would take, but he did not go into any other details. In general, the more resources the development and design community have around the block system, the faster the ecosystem can evolve. Only time will tell what Gardner’s team within WP Engine creates.

“When I joined WP Engine in late September, it was evident to me [WP Engine] saw the value in building relationships with designers, developers, and creators — within our Atlas product line, as well as with WordPress,” said Gardner. “While there was interest in Frost when I came on board, it wasn’t until my vision for our team became clear did an acquisition enter the picture. I recommended bringing Frost into the company and hiring Nick Diego.”

Diego is the creator of the Block Visibility and Icon Block plugins. He also began working on Frost in late September.

“In alignment with WP Engine’s core value of ‘Committed to Give Back,’ Frost is transitioning from a paid product to a free one,” said Gardner. “Given the change in business model, we issued full refunds to all active customers. By open-sourcing Frost and focusing on Full Site Editing, we hope to encourage a community of builders to experiment with the expanding capabilities of the block editor. We believe in its potential and look forward to helping it grow.”

Frost is open to everyone via the WP Engine themes repository on GitHub.

When Gardner sold StudioPress in 2018, several factors played a part in the decision. Among them were the uncertainty around the Gutenberg project and WordPress’s future.

“It took some time for me to put the pieces together, but when I did, I saw just how powerful the block editor has become,” he said. “In particular, I am excited about block patterns, global styles, and building themes that folks can use to create beautiful websites with little effort.”

The result of his newfound enthusiasm around the block system was Frost. I have had the opportunity to tinker around with the theme. It has Gardner’s signature minimalist design style, a focus on readable typography, and ample breathing room for the content.

Simpler designs almost feel par for the course with any block theme these days, regardless of the theme author. What is likely to set Frost apart is its block patterns. It currently ships with 38 of them. The layouts should allow users to quickly set up their sites, along with the theme’s custom block styles.

“I am a huge fan of block patterns and see their potential when paired with the growing support of design/style elements within theme.json,” said Gardner of the things he is excited about. “Additionally, the site editor is something I feel, once mature, will be a game-changer for WordPress and those who build for it.”

The Block Pattern Explorer plugin was initially a part of the Frost library plugin, but Gardner and Diego pulled it out and make it available to everyone. They also wanted to serve the Frost patterns through it. The hope is that the enhancements already in place via the plugin find their way into core WordPress. 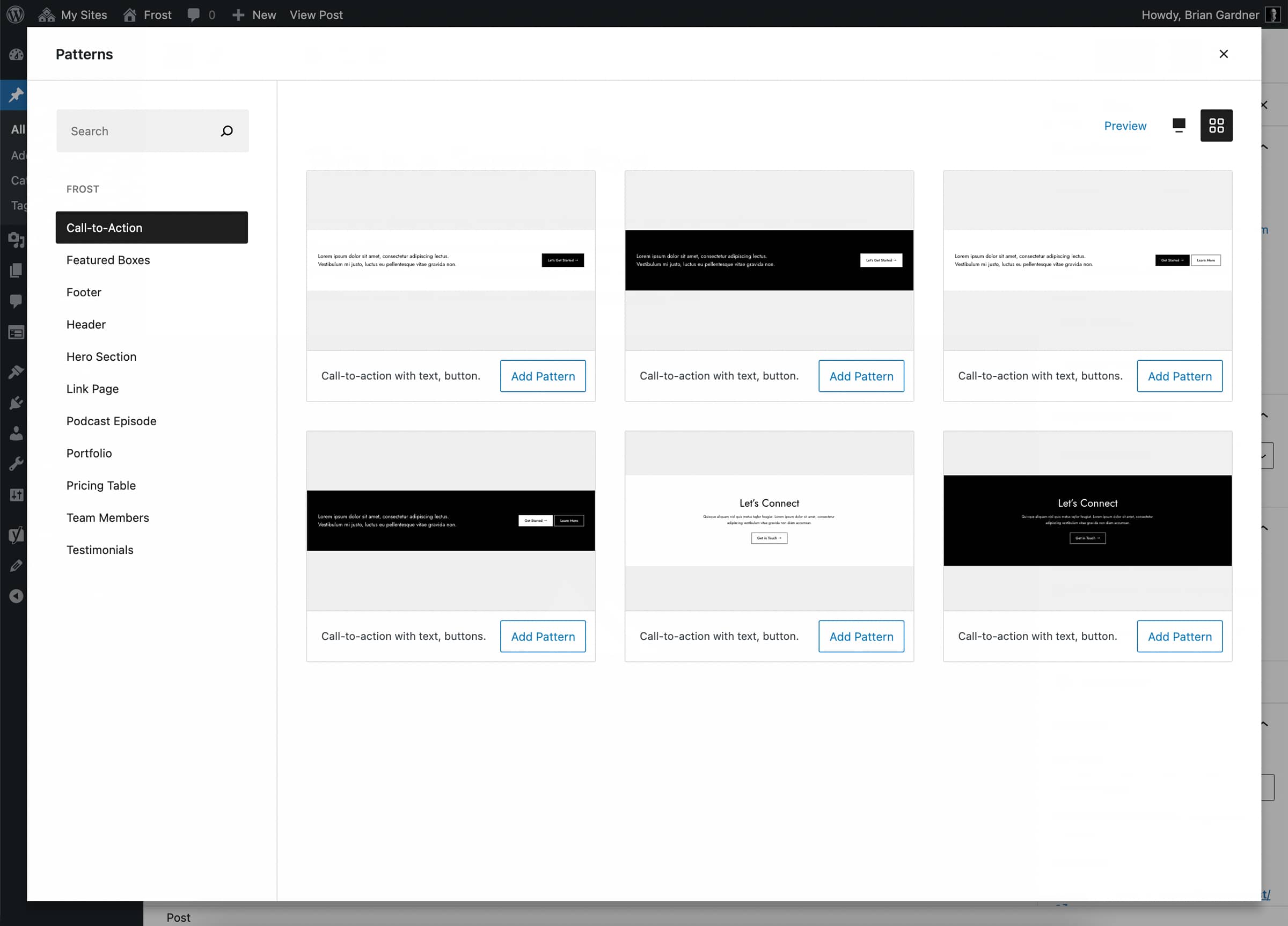 The design is a bit more polished than core. It includes category types, a feature the theme uses to separate its own pattern categories from others. The experimental explorer plugin allows users to preview patterns via desktop, tablet, and mobile views. And, it has a clear “Add Pattern” button for inserting a block pattern into the post.

Eventually, they plan to sunset the plugin once its features make their way into WordPress.

WordPress theming has come a long way since Gardner first dove in over a decade ago. Back then, users had to open template files to customize bits and pieces of their homepage. As we move toward WordPress 5.9, users will have that same power. However, they will modify Frost via the WordPress site editor instead of PHP files.

“Yes, I feel we are circling back to some degree,” he said. It was in response to a question of his early days designing themes for WordPress in comparison to now.

“While WordPress will never be solely a blogging platform ever again, it seems like the software is shedding its skin. The irony here is that we see WordPress used in sophisticated ways that — to be honest — I never thought would be possible. As for me, I believe in the power of simplicity. That has become my north star for everything I create and has allowed me to navigate the ebbs and flows of an ever-changing software and industry.”