The Kyiv Independent, a new English-language media outlet powered by WordPress, is seeking donations to continue their reporting at this critical time in Ukraine’s struggle against Russian invasion.

The fledgling publication is just three months running and its staff is already plunged into what may be some of the most important reporting of their lifetimes. 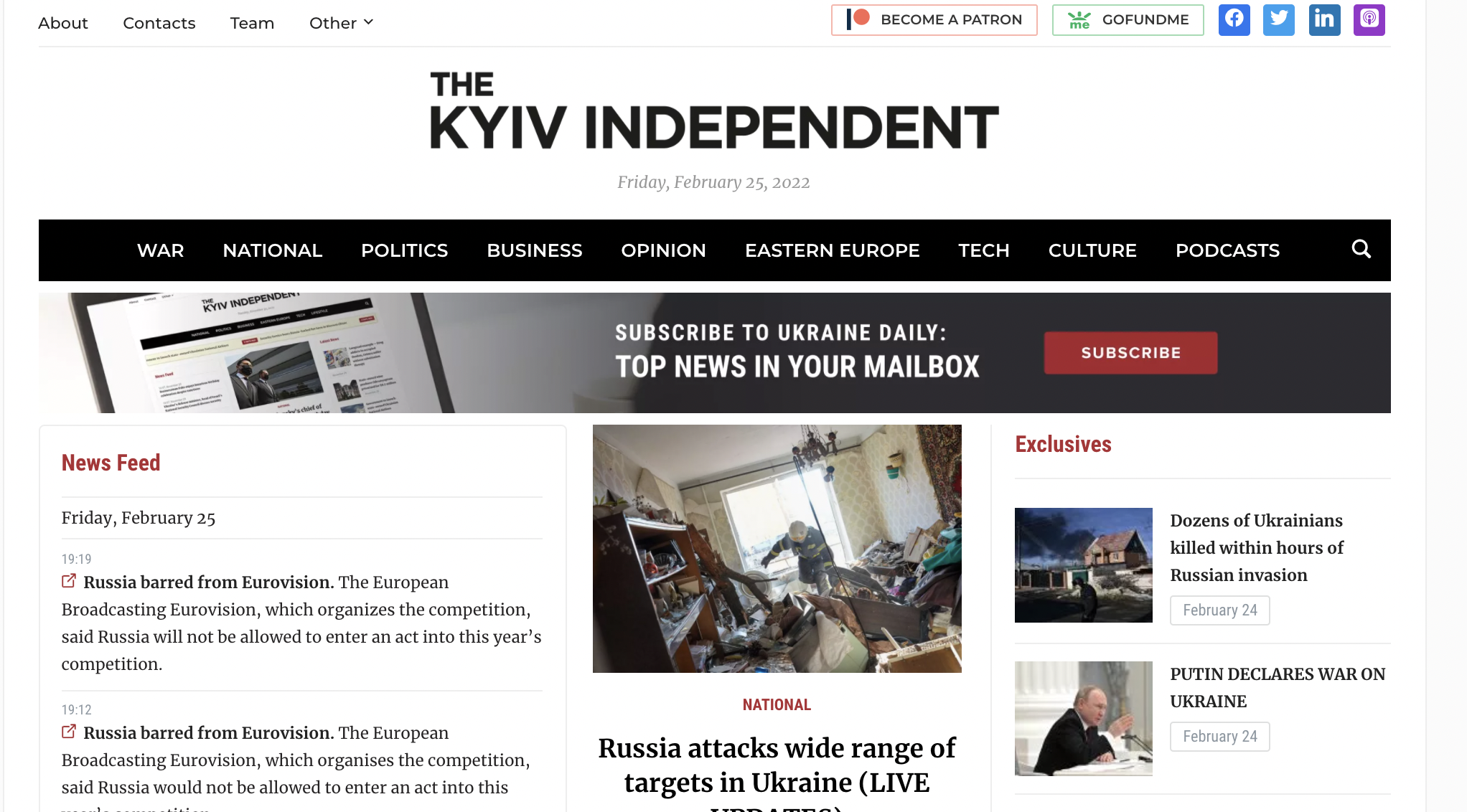 The Kyiv Independent was created by 30 journalists who were previously employed at the Kyiv Post but fired for what they say was retaliation for exercising their editorial independence. The publication, led by Olga Rudenko, its new editor-in-chief, tells the story of its values and origins on the website:

The Kyiv Post, Ukraine’s global voice, went silent on Nov. 8, 2021, days after celebrating the 26th year of its uninterrupted run.

The publication was shut down by the owner in his attempt to take full control of the newsroom that has always followed the principle of editorial independence.

Yet, the editorial team of the independent Kyiv Post refused to be silenced. If we couldn’t save the Kyiv Post brand, we could save its values.

At the moment the publication reports they are “dealing with increased volumes of traffic, attacks, and an unpredictable situation on the ground.” Rudenko gave a brief update from Kyiv via video yesterday:

Please follow us at @KyivIndependent, most of us are on the ground in #Kyiv working to provide you with the latest news. It’s extremely stressful. No one knows where it is safe to be, or whether there will be more strikes and where, and Russian troops are moving from the north. pic.twitter.com/6gXgeSEM1V

The Kyiv Independent is running a gofundme campaign to raise funds for their new publication and continued reporting efforts during this critical time. The campaign was set up by Kyiv Independent’s London-based CFO Jakub Parusinski. Their cause is resonating with free press supporters from around the world and so far they have raised £233,494. The publication also has a Patreon account which is bringing in $24,173/month from more than 2,000 patrons.

“It is crucial to bring credible news from Ukraine to the world,” Parusinski said. “Especially when Russian forces are working hard to distort the perception of Ukraine abroad.

“We are asking you to stand up to it together with us. We are not backed by a rich owner or an oligarch. We will rely first and foremost on fundraising from our readers and donors, and later on commercial activities.”

Patchstack is one of the first companies to reach out to The Kyiv Independent with an offer to help.

“Patchstack not only wants to offer them our WordPress security services free but  we are actively looking to help Ukrainian organizations at this time,” Patchstack Security Advocate Robert Rowley said. He also signed up to support the organization through the fundraiser.

“I personally like to support independent journalists and their background tells the story of the type of journalism I want to support,” Rowley said.

Patchstack is in the process of setting up a site called UA Cyber Help, an effort led by their CEO Oliver Sild and four employees with an average of 15+ years in security. They are volunteering their time to bring resources to organizations like The Kyiv Independent and others affected by the war in Ukraine.

I have reached out to The Kyiv Independent’s news team to inquire about their needs and how the WordPress business and hosting community can help. We will publish a followup when we hear more from their team.