WordPress developer Phi Phan has been making small splashes lately, but in a sea of 1,000s of plugins, it is increasingly tough to make a wave. Over the weekend, he released the Block Enhancements plugin, the first pass on a project that he plans to iterate on with new ideas.

However, this is not his first block-related plugin. Last year, he launched Content Blocks Builder, a plugin that allows developers and users to create blocks from others, patterns, and variations. In February, he released Meta Field Block. He then followed it up with the launch of SVG Block and Block Enhancements last week.

I have quietly tested each as they strolled into the WordPress plugin directory, but they kept getting relegated to the back of the draft posts list. Most seemed like solid plugins at the time, and a reminder from two different people in the past week to check out Phan’s work lit a fire under me. It was time to share what he has been doing with WP Tavern readers.

The SVG Block plugin is a unique take compared to some existing solutions. Users can output the SVG as an image or implement it as a divider.

Phan is not short on ideas for new blocks and enhancements. He rattled off a hefty list of features that he plans to build when questioned.

“A simple separator with an icon,” he noted as an idea. “I’ve tried to support icons in the core/separator, but it requires changing the markup. So I may create a new tiny block just for it. Maybe a wavy divider designer block. I know there are already some on the plugin directory, but they are not fit for some use cases. I’m kind of obsessing with SVG stuff. A ‘toggle’ button block for showing modal, off-canvas, or collapse layout.”

BoldBlocks is his upcoming website, which he will eventually use to promote his plugins. He has yet to launch it—likely because he has been too busy developing new projects.

“[Content Blocks Builder] is my main business focus in the long term,” said Phan. “It’s a tool allowing users to create blocks from other blocks. It helps to create responsive ‘boring’ grid layouts or carousel layouts easily without touching code. I used to create layouts like those with the ACF repeater field, but I didn’t like that kind of workflow in the Gutenberg world anymore. That plugin has many more features than the description on the plugin page, but I’ve not finished rewriting the description and user guides.”

Block Enhancements is not a block in and of itself. It takes a similar route as EditorsKit and Editor Plus, adding features on top of the system.

The first version of the plugin adds a single feature that allows end-users to stick icons into the core Button, Heading, and List blocks. 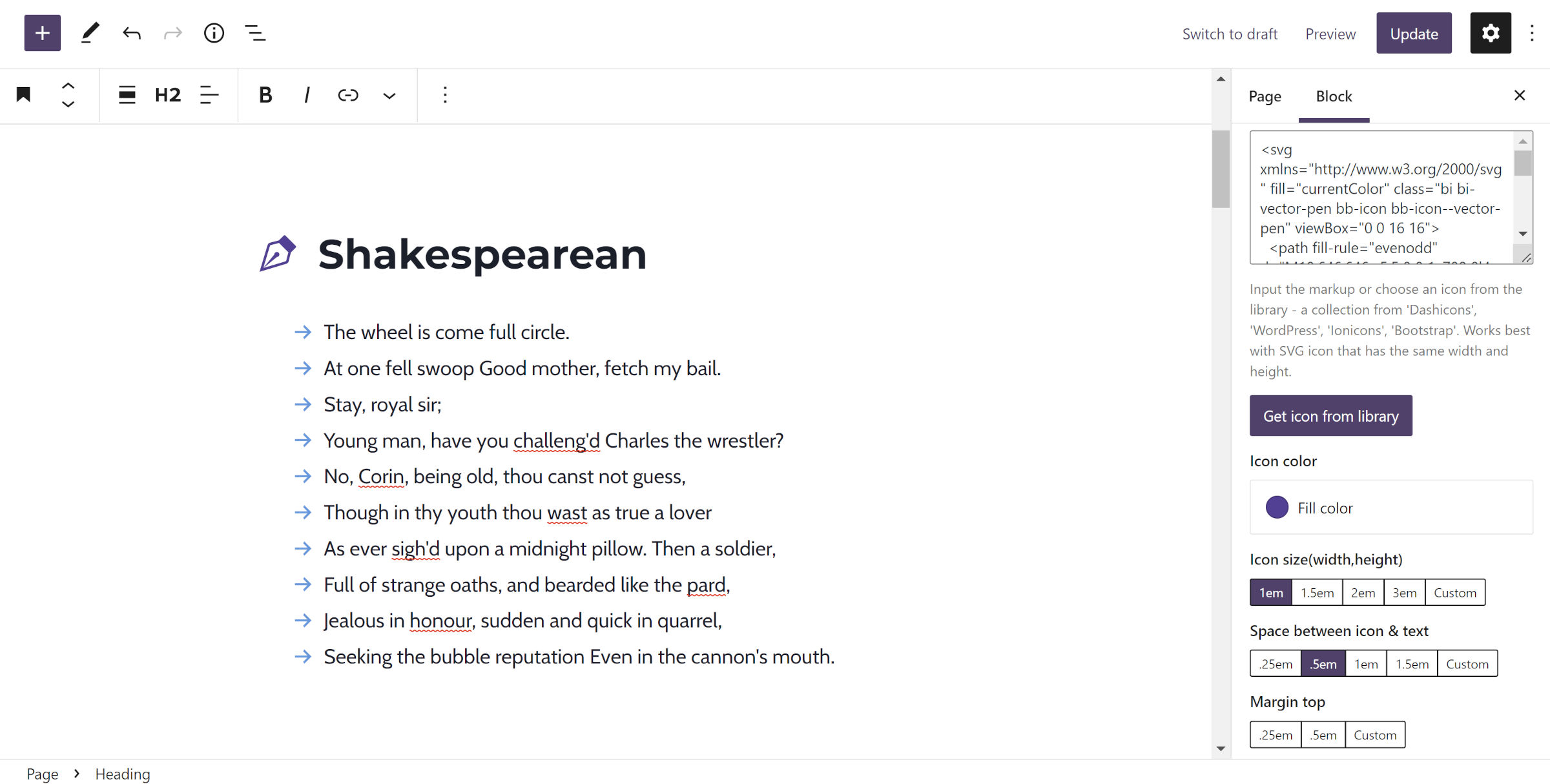 Maybe the plugin does not offer enough features to grab everyone’s attention, but it is off to a solid start. Phan does not go overboard with the UI, keeping it simple and following WordPress standards. The icons feature had just the right amount of customizability that I never felt like I needed anything more.

While not listed anywhere in the plugin description, the default library looks to be a mix of Ionicons, Bootstrap, and core WordPress icons. In total, there are over 3,500 options for users to choose from.

If the library does not offer enough choices, the block allows users to directly paste in SVG code.

This is the start of something new, and Phan has already created what looks to be an exciting to-do list for Block Enhancements’ future. Some potential features include:

If Phan continues iterating on Block Enhancements with these and other features, it will be a plugin to keep an eye on.