Confused by the difference between IPv4 vs IPv6?

IP, an abbreviation for Internet Protocol, is a protocol that helps computers/devices communicate with one another over a network. As the “v” in the name suggests, there are different versions of Internet Protocol: IPv4 and IPv6.

In this post, we’ll dig into everything that you need to know to understand the difference between IPv4 and IPv6. Here’s what we’ll cover:

What Is the Internet Protocol (IP)?

Internet Protocol (IP) is a set of rules that help with routing packets of data so that the data can move across networks and make it to the right destination.

When a computer tries to send information, it gets broken down into smaller chunks, called packets. In order to make sure these packets all make it to the right spot, each packet includes IP information.

The other part of the puzzle is that every device or domain on the Internet is assigned an IP address that uniquely identifies it from other devices.

This includes your own computer, which you’ve probably encountered before. If you go to one of the many “What’s My IP Address?” tools, they’ll show you your computer’s IP address and a rough guesstimate of your location (which should be accurate unless you’re using a VPN).

The IP address that you’re most familiar with probably looks something like this:

By assigning each device with an IP address, networks are able to effectively route all these packets of data around and make sure they make it to the right spot.

Despite the “4” in the name, IPv4 is actually the first version of IP to be used. It was launched all the way back in 1983 and, even today, it’s still the most well-known version to identify devices on a network.

The IPv4 uses a 32-bit address, which is the format that you’re probably most familiar with when discussing an “IP address”. This 32-bit address space provides almost 4.3 billion unique addresses, though some IP blocks are reserved for special uses.

Here’s an example of an IPv4 address:

The IPv6 is a newer version of IP that uses a 128-bit address format and includes both numbers and letters. Here’s an example of an IPv6 address:

Why Did We Need a New Version of IP?

At this point, you might be wondering why IPv6 even exists.

Well, while the 4.3 billion potential IP addresses in IPv4 might seem like a lot, we need a lot more IP addresses!

There are a lot of people in the world with a lot of devices. This is an even larger issue with the rise of IoT devices (Internet of Things) and sensors, as these greatly expand the pool of connected devices.

Put simply, the world was running out of unique IPv4 addresses, which is the biggest reason why we needed IPv6.

There are also some other more nitty-gritty technical reasons, though – let’s discuss them.

? IP, short for Internet Protocol, helps computers/devices communicate over a network. This guide digs into the differences between versions IPv4 and IPv6 ?Click to Tweet

What Is the Difference Between IPv4 vs IPv6?

Now, let’s receive into the difference between IPv4 vs IPv6.

The most obvious difference, and the most applicable for regular people, is the difference in formats:

Without getting into the math (we’ll save that for the next section), this means that IPv6 offers 1,028 times more addresses than IPv4, which essentially solves the “running out of addresses” problem (at least for the foreseeable future).

IPv6 is also an alphanumeric address separated by colons, while IPv4 is only numeric and separated by periods. Again, here’s an example of each:

How Many Addresses Are in IPv4 vs IPv6?

As we mentioned above, IPv6 supports 1,028 times more IP addresses than IPv4.

That means we have a long way to go before we run out of IPv6 addresses!

Is There a Difference Between IPv4 vs IPv6 Speed? Which Is Faster?

In general, there’s no major difference between IPv4 vs IPv6 speeds, though some evidence does suggest that IPv6 might be slightly faster in some situations.

On the “no difference” side, Sucuri ran a series of tests on sites that supported both IPv4 and IPv6 and found that there was basically no difference on most sites that they tested.

However, you can also find some evidence showing IPv6 to be faster. For example, Facebook’s Engineering blog stated that “We’ve observed that accessing Facebook can be 10-15 percent faster over IPv6”.

Similarly, Akamai tested a single URL on an iPhone/mobile network and saw that the site had a median load time that was 5% faster with IPv6 vs IPv4.

However, there are a lot of variables, so it’s difficult to compare performance without running tightly controlled experiments.

One reason why IPv6 might be faster is that it doesn’t waste time on Network Address Translation (NAT). However, IPv6 also has larger packet headers, so it could potentially be slower for some use cases.

Is IPv4 or IPv6 More Popular?

Though the numbers are changing as IPv6 increases its adoption, IPv4 is still the most widely-used Internet Protocol.

Google maintains public statistics for IPv6 availability of Google users by countries around the world. These numbers are the percentage of all traffic to Google sites that is over IPv6, rather than IPv4.

Worldwide, IPv6 has around ~32% availability, but it differs greatly between countries. For example, the USA has over 41% IPv6 adoption, while the UK has around 30% adoption, and Spain has just 2.5% adoption. 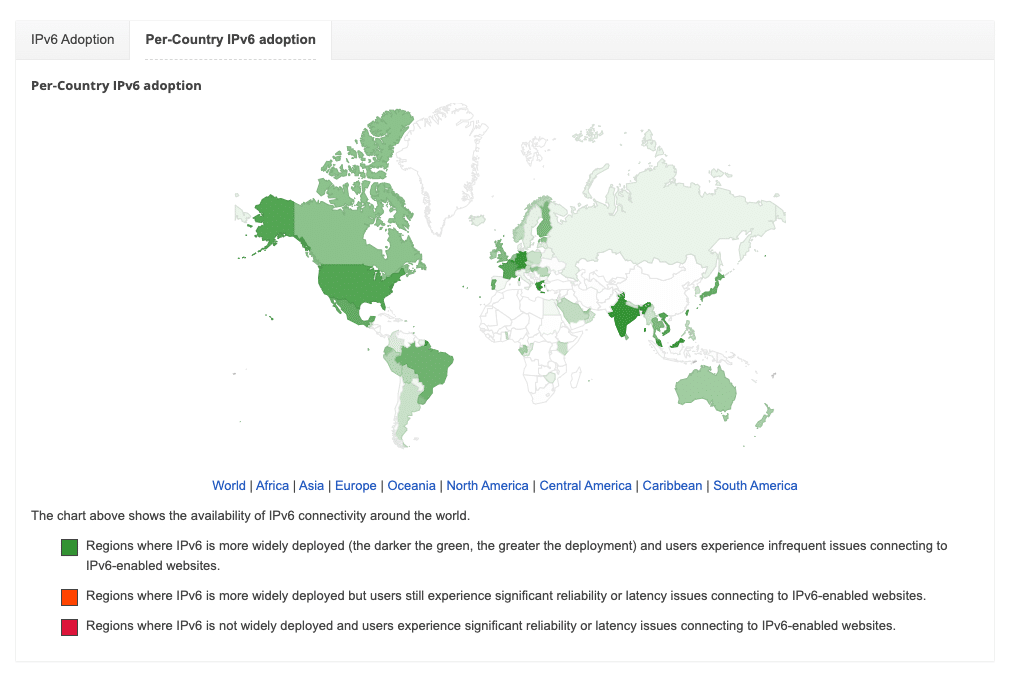 What Internet Protocol Version Does Kinsta Use?

If you host your WordPress site at Kinsta, you might be wondering whether Kinsta uses IPv4 or IPv6. Kinsta currently uses IPv4.

Why? Because Kinsta is powered by the Premium Tier of Google Cloud and, at this time, Google Cloud does not fully support IPv6.

Confused by IPv4 and IPv6? ? Click to see how these two Internet Protocol versions differ.Click to Tweet

The Internet Protocol (IP) helps route data around networks. To accomplish this, each device is assigned an IP address.

IPv4 is the original version that was launched back in 1983. However, its 32-bit format only allows for ~4.3 billion unique addresses, which can’t serve the needs of the modern world.

To address the lack of unique IPv4 addresses (and make some other technical changes), IPv6 was created. IPv6 uses a 128-bit address format that offers 1,028 times as many unique addresses as IPv4.

For most people, that’s all you need to know – IPv6 uses a different format and offers far more unique addresses than IPv4.

Kinsta uses IPv4 because GCP, which underpins Kinsta’s infrastructure, has not rolled out IPv6 support yet. IPv6 is on Google Cloud’s roadmap so this might change in the future.

If you enjoyed this article, then you’ll love Kinsta’s WordPress hosting platform. Turbocharge your website and receive 24/7 support from our veteran WordPress team. Our Google Cloud powered infrastructure focuses on auto-scaling, performance, and security. Let us show you the Kinsta difference! Check out our plans