Gutenberg 8.6 landed quietly last week. Much of the focus right now is ironing out the remaining bugs for WordPress 5.5 during its beta cycle. However, that does not mean the Gutenberg project has come to a complete halt in terms of new features. The team is marching forward with extra goodies for those who use the plugin.

The latest update of the plugin did not cover as much ground as normal, but it does include an enhancement for the Cover block when using a video background and several updates to block patterns.

The primary focus for version 8.6 was squashing bugs. The development team addressed over three dozen of them while correcting a handful of performance issues. While new features and enhancements from 8.6 onward are not expected in the upcoming WordPress 5.5, most bug fixes should be included.

Selecting a focal point for a video background.

The Cover block has long allowed users to pick a focal point for background images. However, this feature was missing when users added a background video to the block. As of version 8.6, that is no longer the case. Both image and video backgrounds should work in much the same way.

Gutenberg now has a new “Focal point picker” option located under the “Media settings” tab when adding a video background. Users can select the focal point by dragging the circle icon in the video box or hardcode left and top percentage values in the input fields below it.

This is not a particularly exciting development for most Gutenberg users. Self-hosting video is not cheap and remains unused for most. However, for those who do use video backgrounds, it is one of those nice-to-have features that is there when needed. 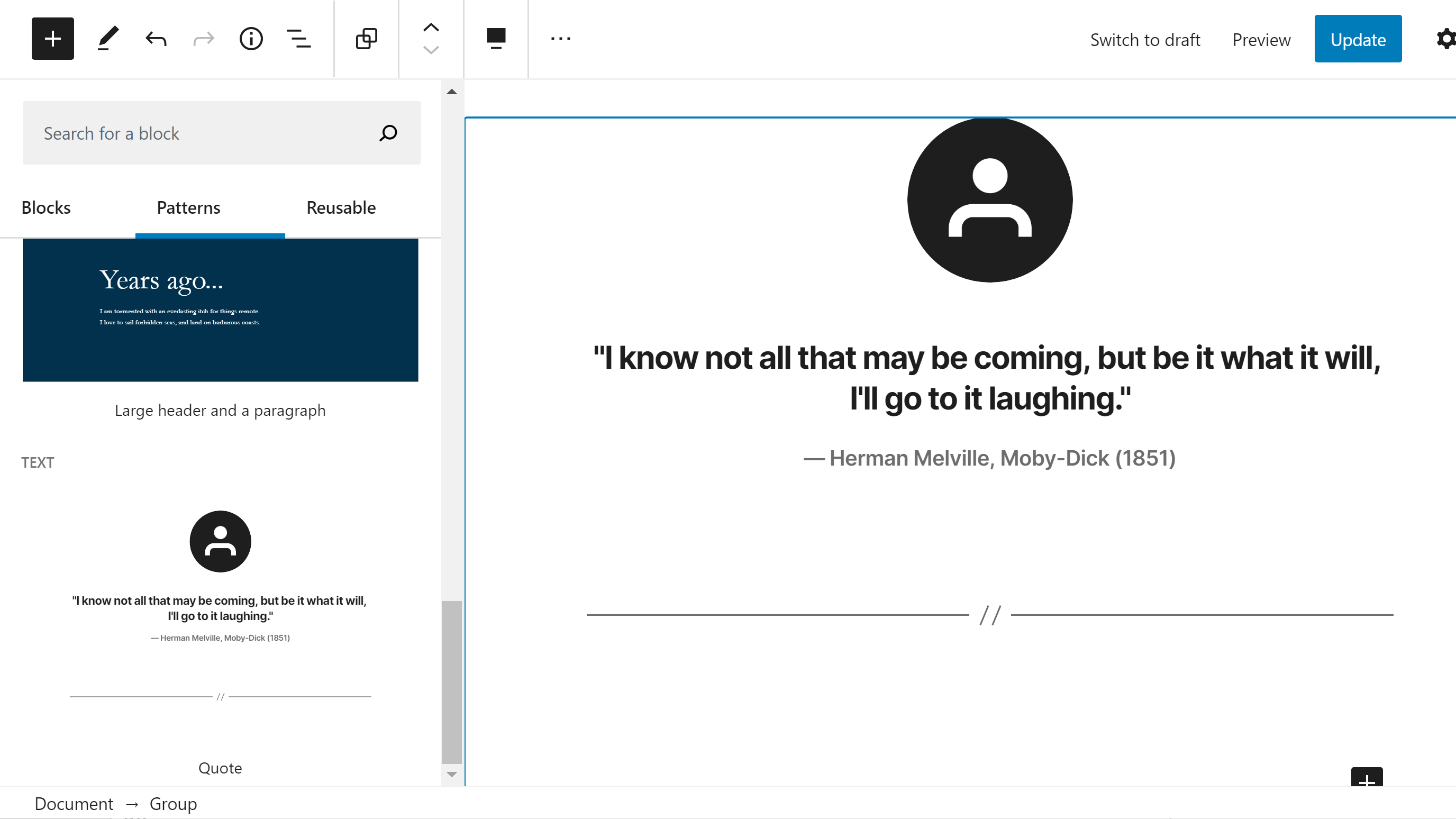 The Gutenberg team updated several of the existing block patterns. For the most part, the pattern updates were minor cosmetic changes, tweaks that improve the overall design. The button-related patterns received simple changes, such as new text labels and colors. The developers also changed the colors and text of the large header patterns.

The team moved the header above the columns in the two columns text pattern and changed the text to make the columns appear equal height by default. It is a poor use of textual columns, which would ideally be handled with CSS instead so that it works appropriately across screen sizes. Perhaps it would be better to have a “Text Columns” block in the long run.

The nicest block pattern update was for the quote pattern. It now has an image at the top and a separator at the bottom. It is akin to a single testimonial, which is more of a pattern than a basic quote.

Theme authors can also remove support for the core block patterns with a single line of code: remove_theme_support( ‘core-block-patterns’ ). This does not drop support for patterns altogether. For example, patterns added by plugins or the theme will still appear in the inserter.

When writing in fullscreen mode, the “back to posts” link has utilized the WordPress logo in the past. In version 8.6, the user’s custom site icon will take its place. However, this will only happen if the user has uploaded an icon via the customizer.

I am unsure how I feel about this change. In practice, it almost feels like clicking the icon should take me to the front end of the site instead of the post management screen. At least with the WordPress icon, it felt like it was pointing toward an admin-side screen instead. For my workflow, I would rather see this link/icon replaced with a button that toggles between fullscreen and normal mode, popping the admin menu back into place rather than departing the editing screen altogether.